A Bit Of New Year's Glitz and Glamour tablescape 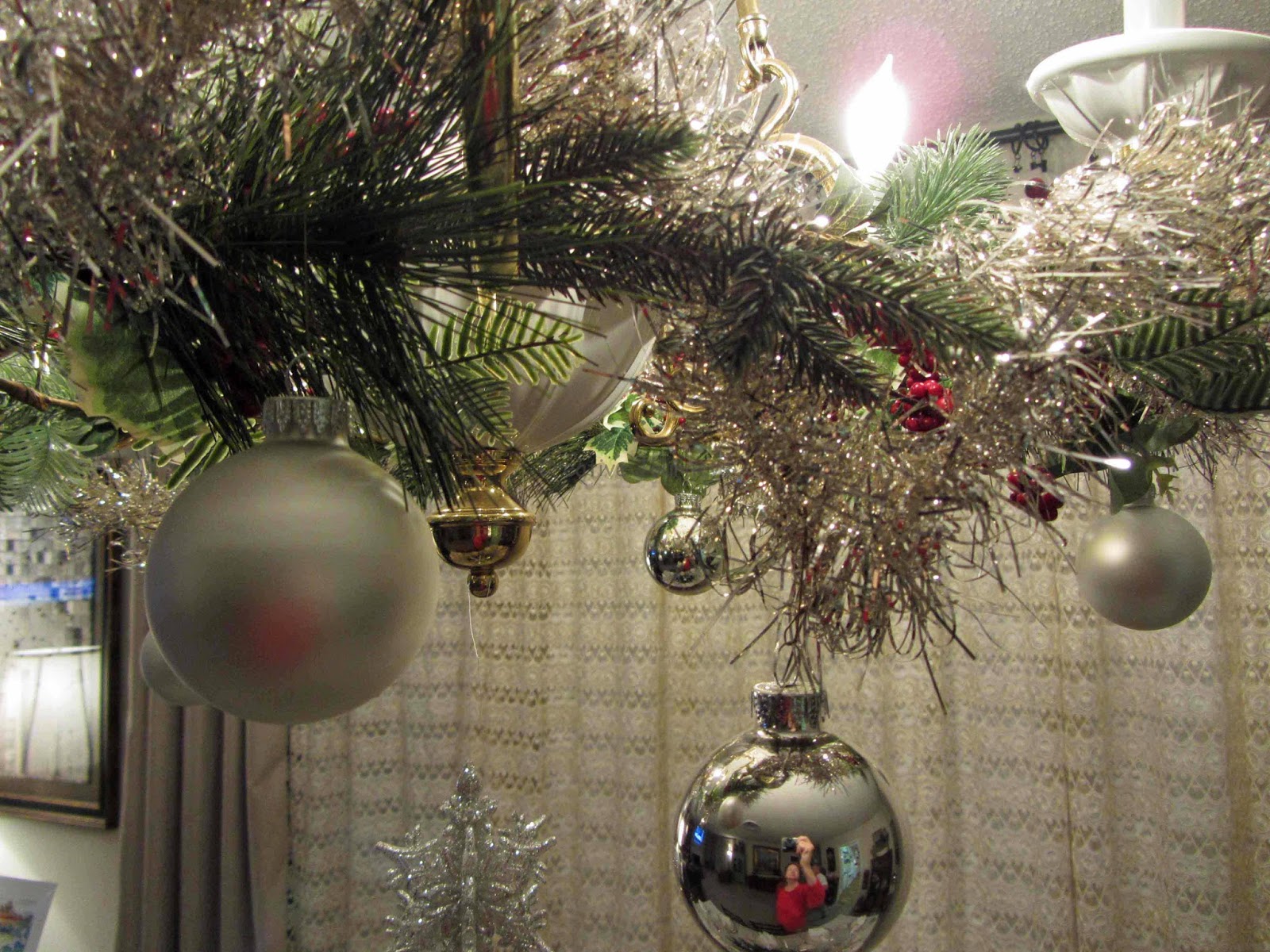 It's certainly been a while since I posted a table! Today I thought I'd share the one at which we celebrated the New Year, ate our black-eyed peas, and were filled with gratitude for all of God's blessings. 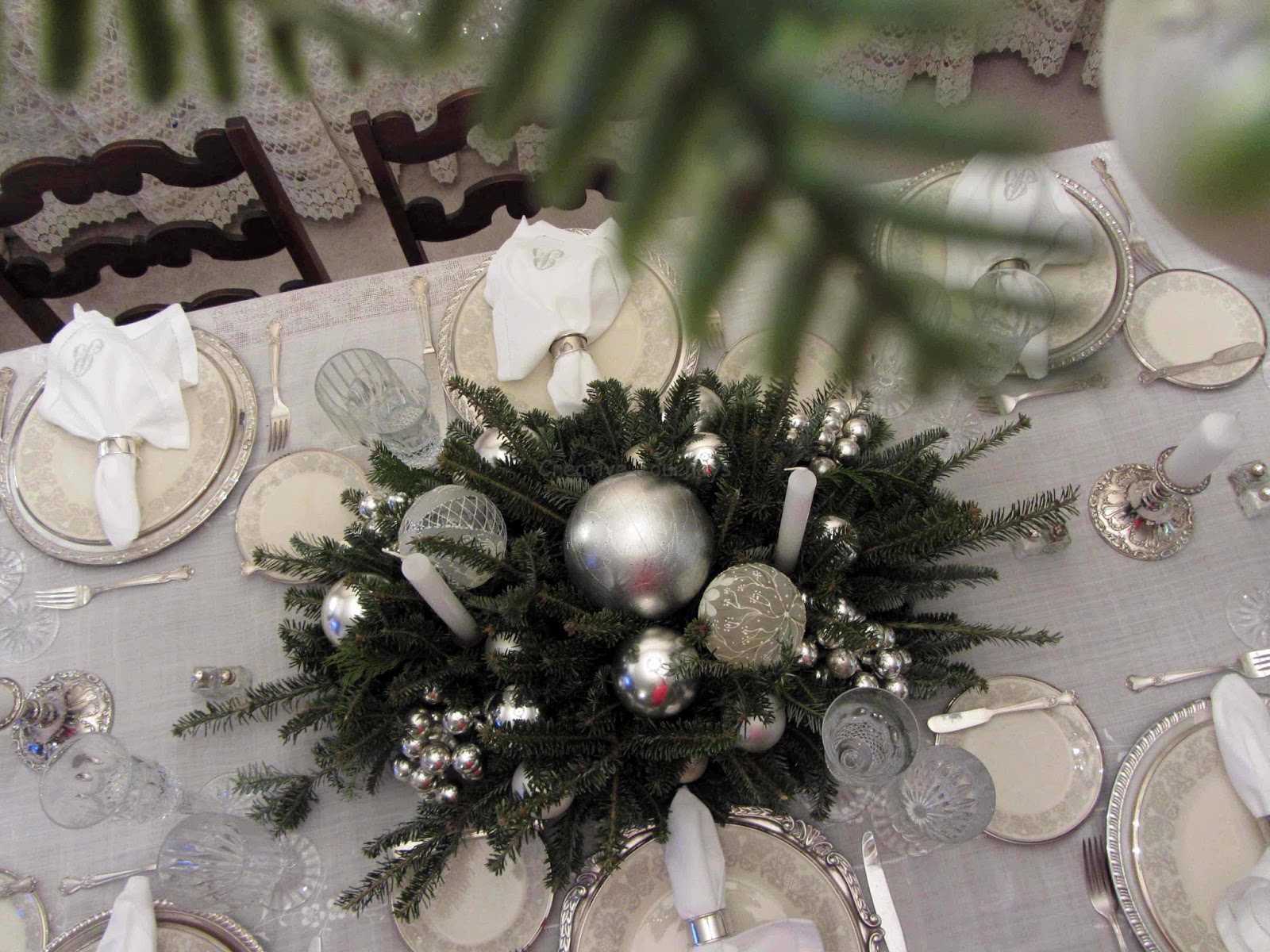 It was a year of silver and white. Glitz and Glam. China and Crystal. Fine linen. 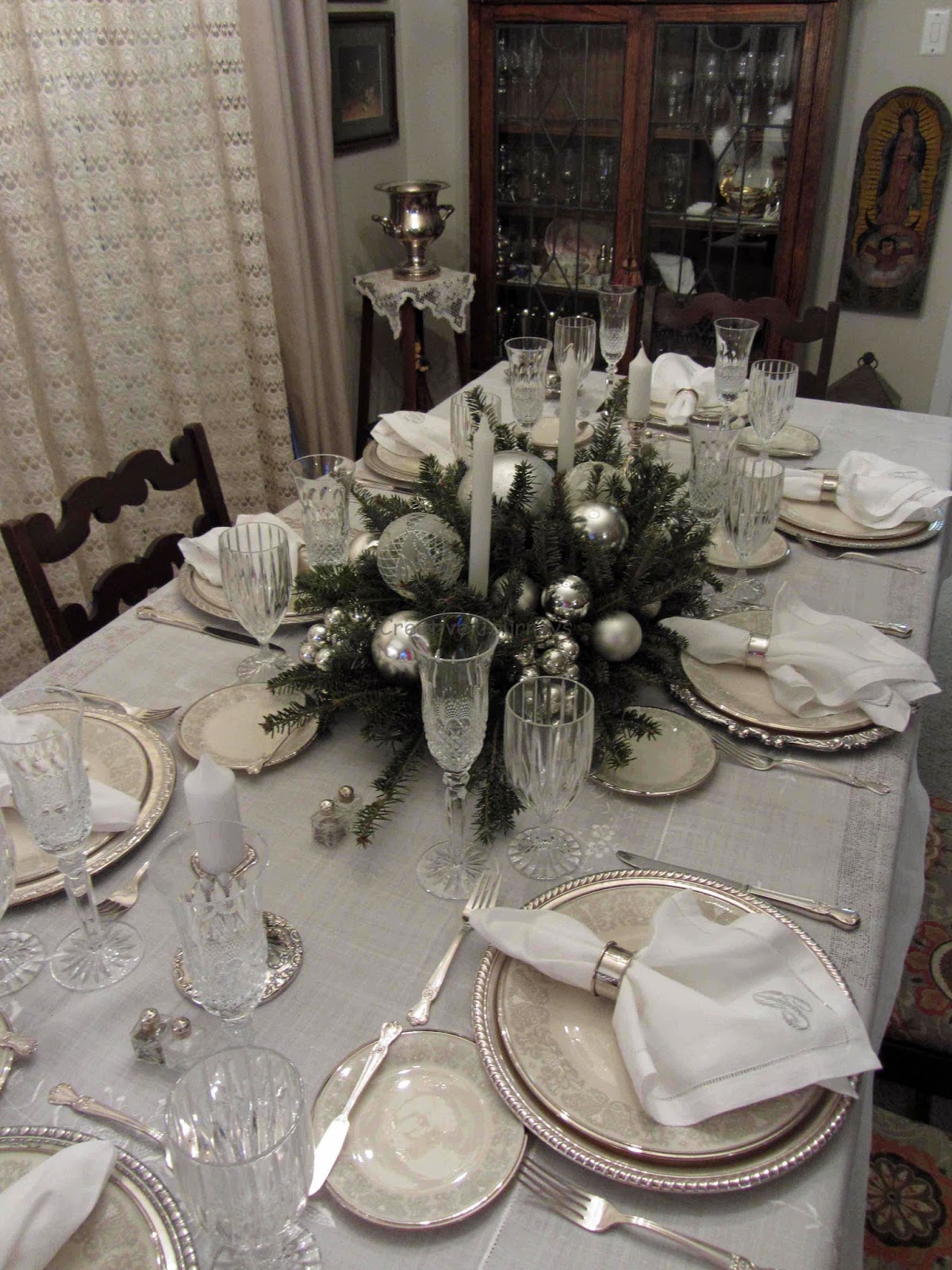 There would be no children at this table. They had much more fun at a table of their own complete with toys, candy and no one telling them what to do. 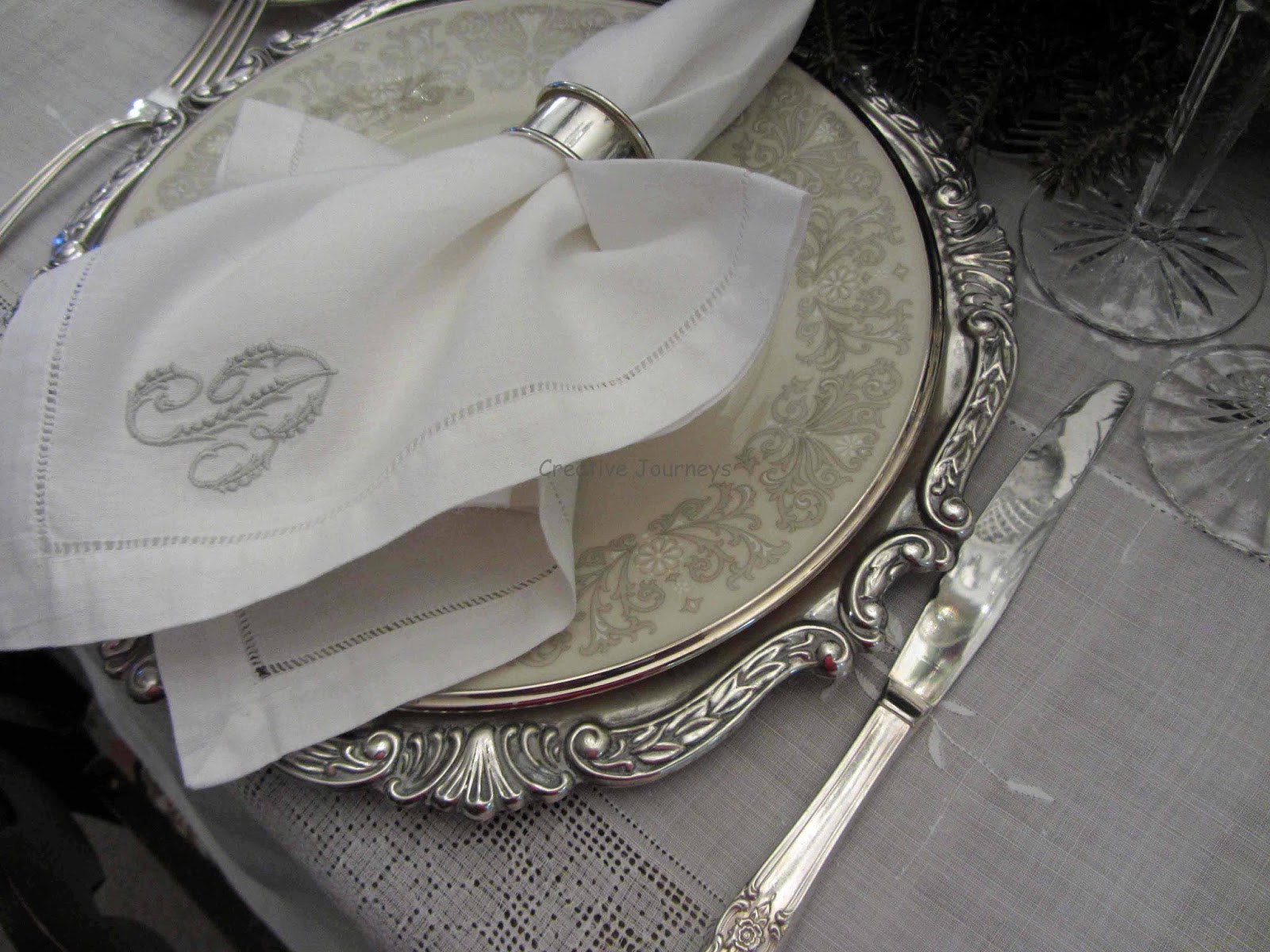 We had just celebrated our 39th wedding anniversary, so I really wanted to use our wedding china. I still love it as much as when I picked it out. 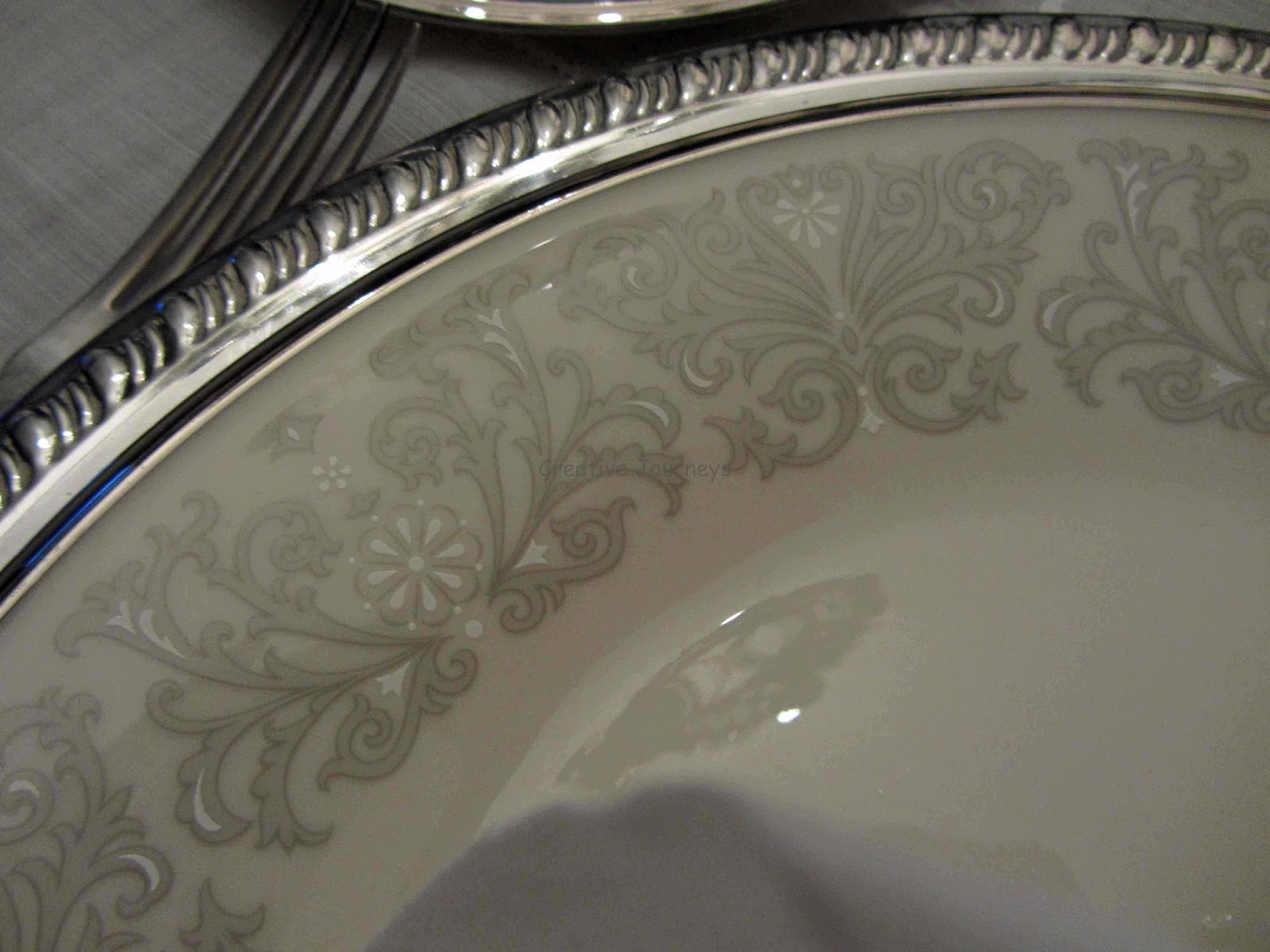 The motif may not be as current right now, but it certainly satisfies the girly part of me with it's intricate pale gray scrolls and touches of white on the bone china. 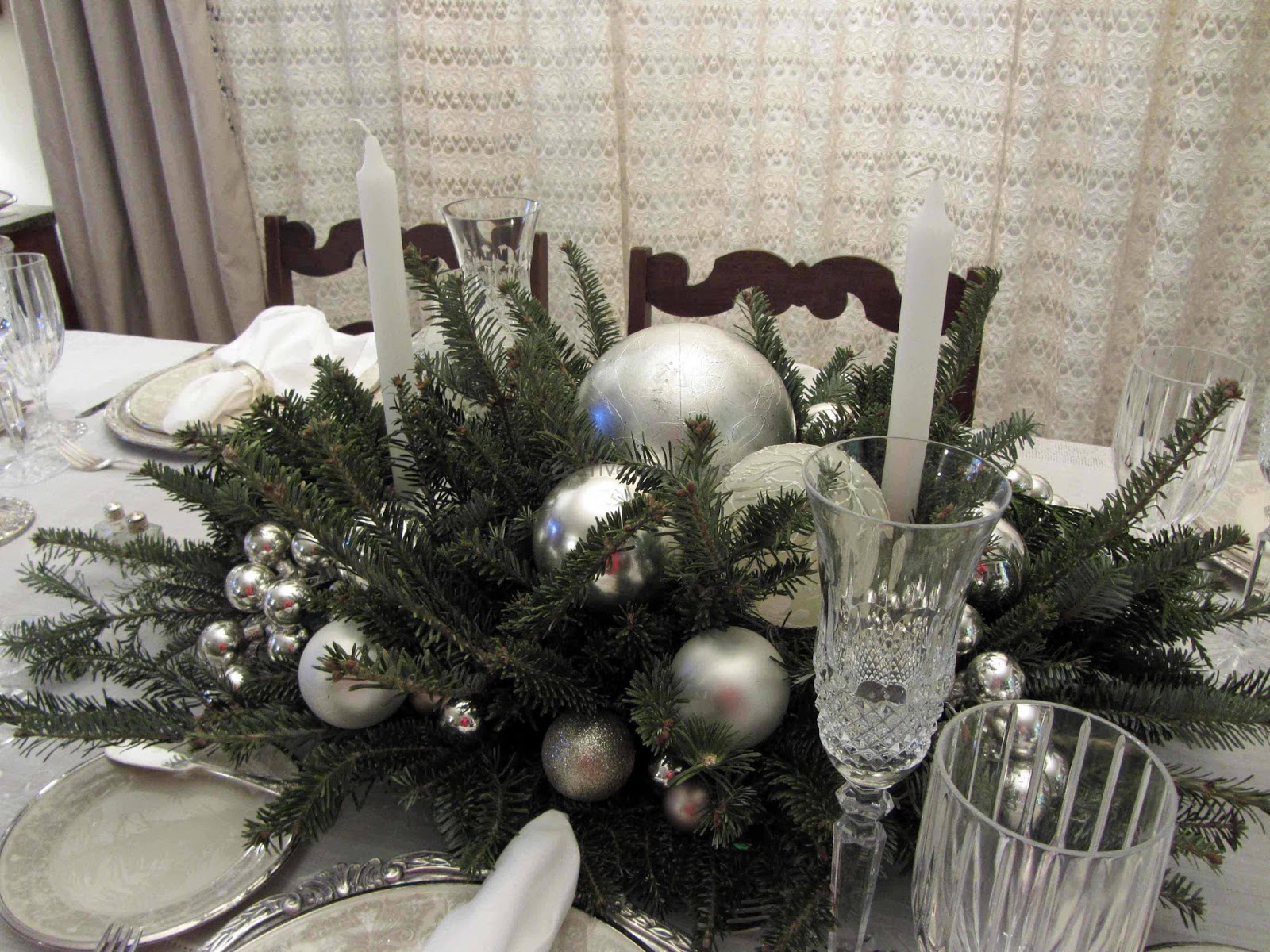 The centerpiece. Greenery filled with silver orbs. Christmas balls attached to the flower brick that holds the fir branches. 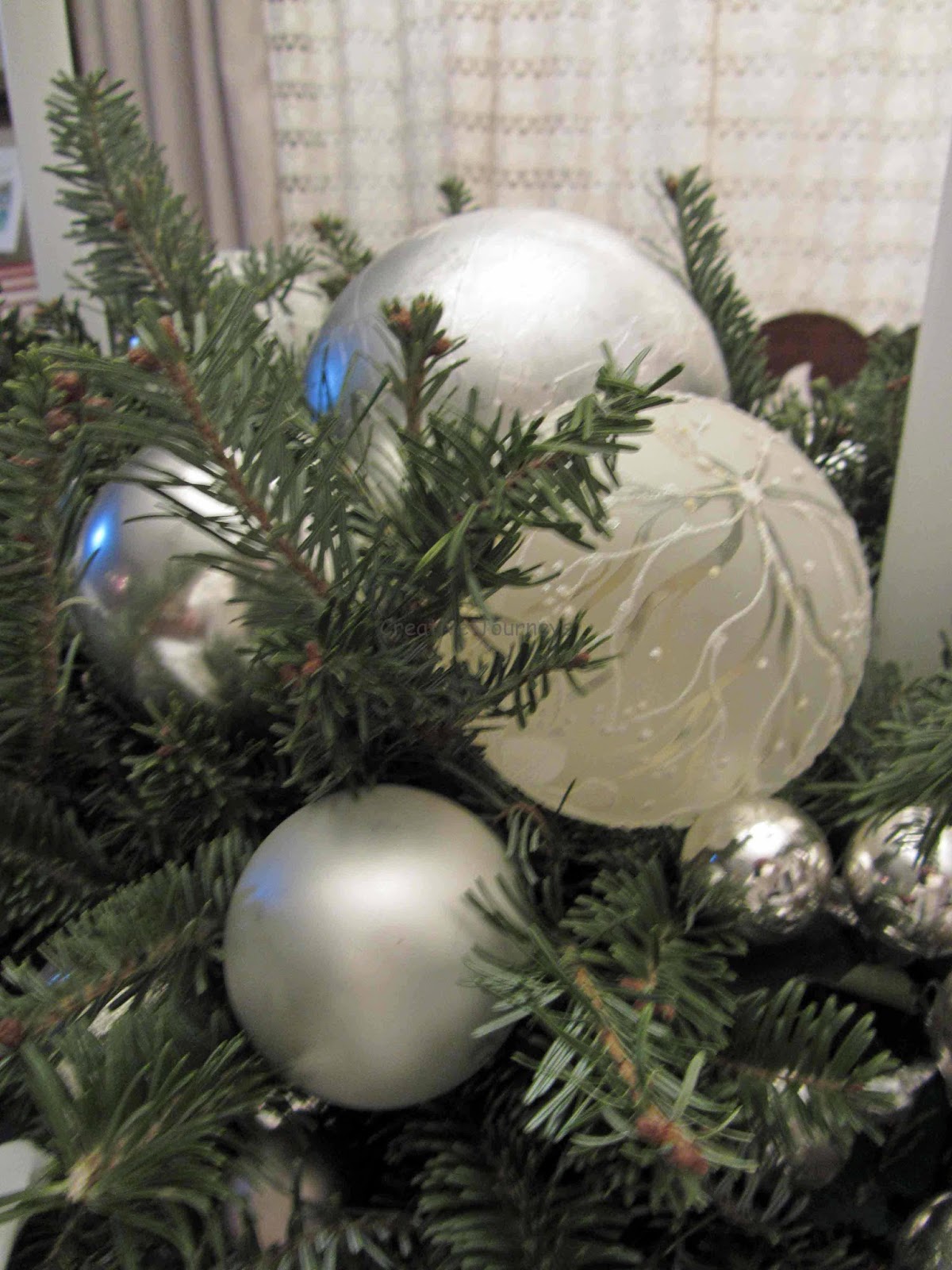 These balls never see the light of day unless I am doing a silver table. Silly I know. 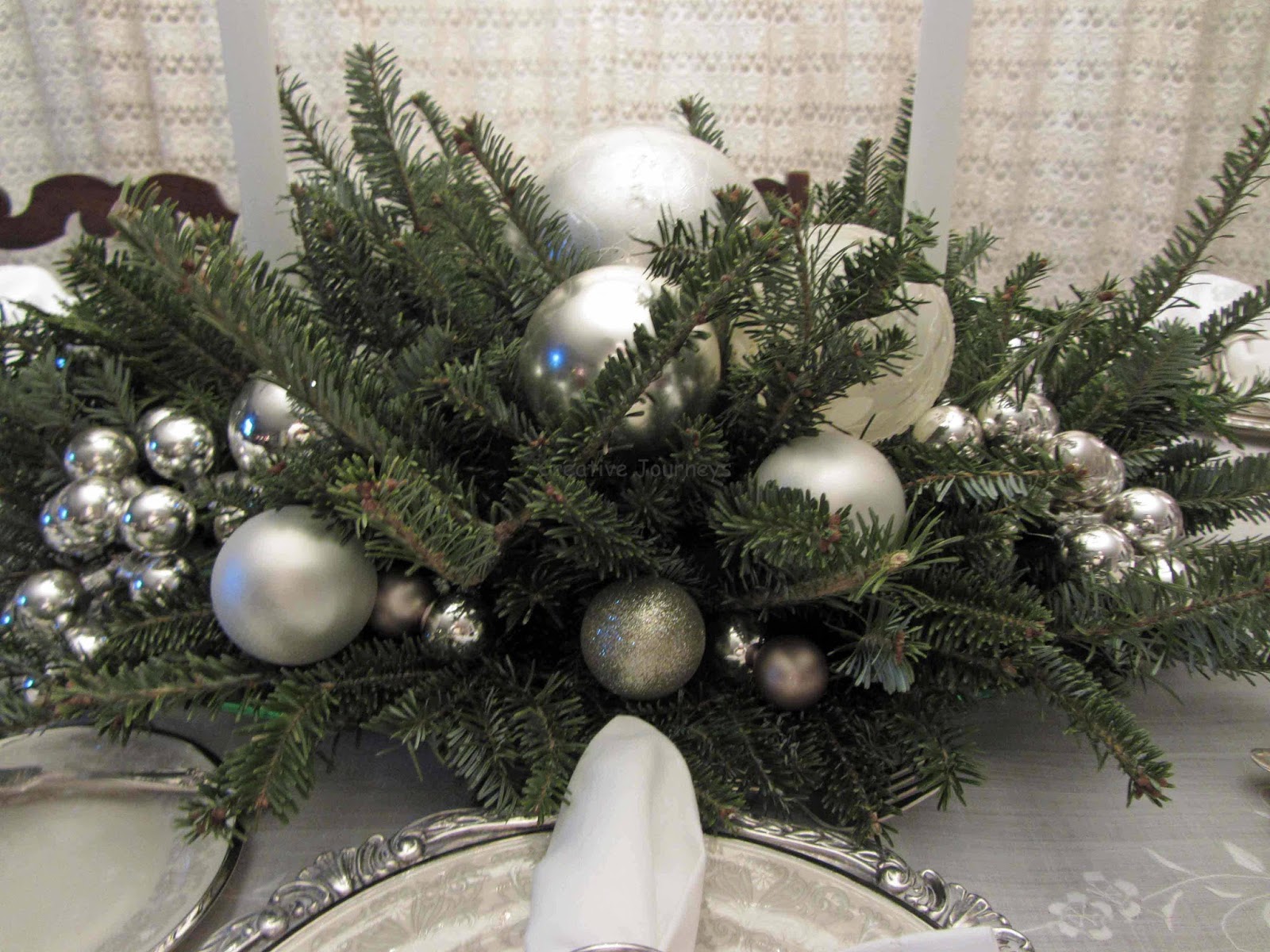 I've got a really good tip to share. I wanted some fresh greenery for the table.
Called my friend the wholesale florist. Of course they had none. It was after Christmas.
His tip: Go buy a tree! Wasn't sure if anyone would still have on the 31st of December.
I was wrong. Lowe's Home Improvement. $3.00 and that included the stand. And still so fresh! 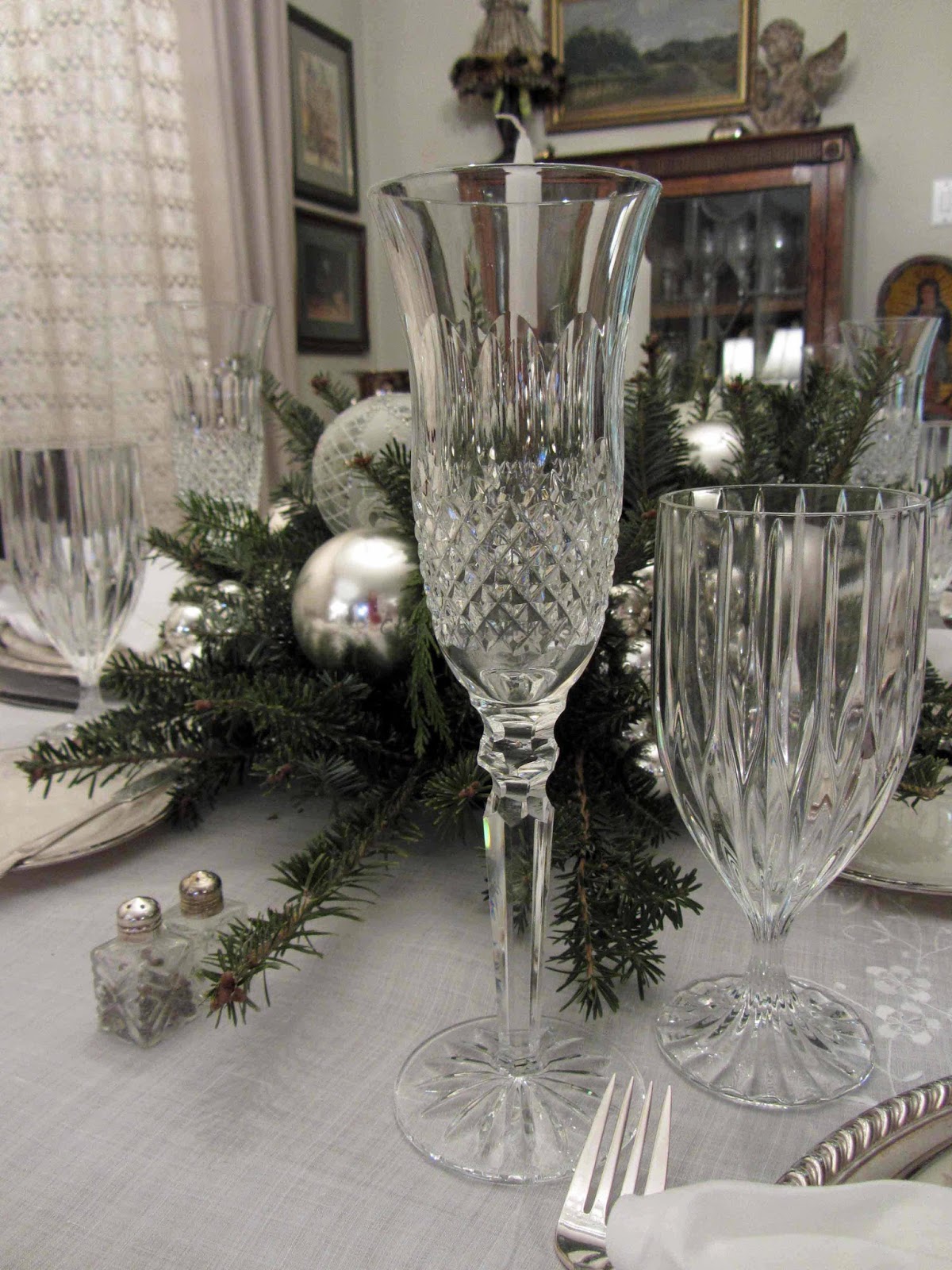 I love how light bounces off the crystal. I really should use it more often. 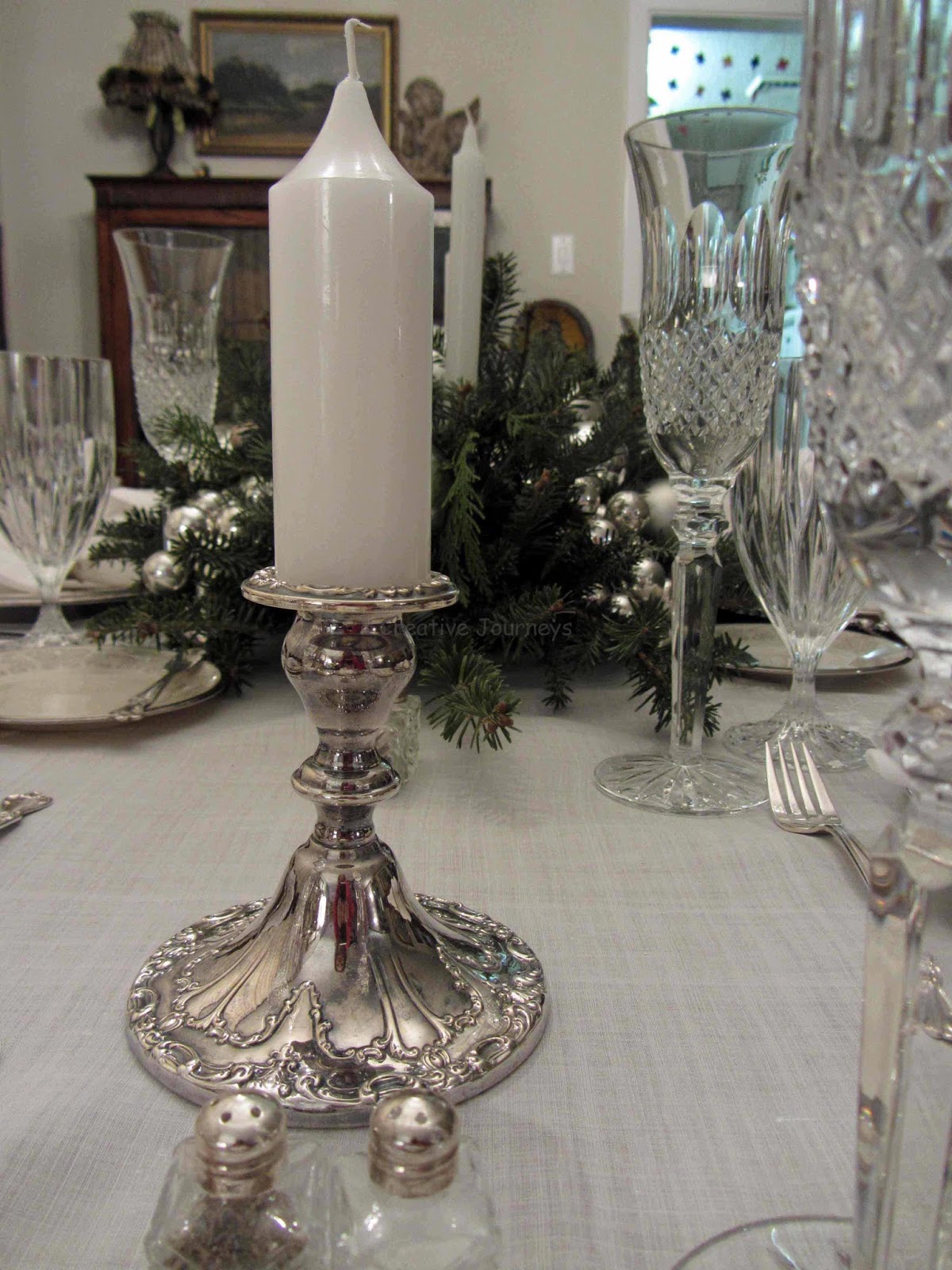 Besides the candles in the centerpiece, I added a pair of silver candlesticks, one on each end. 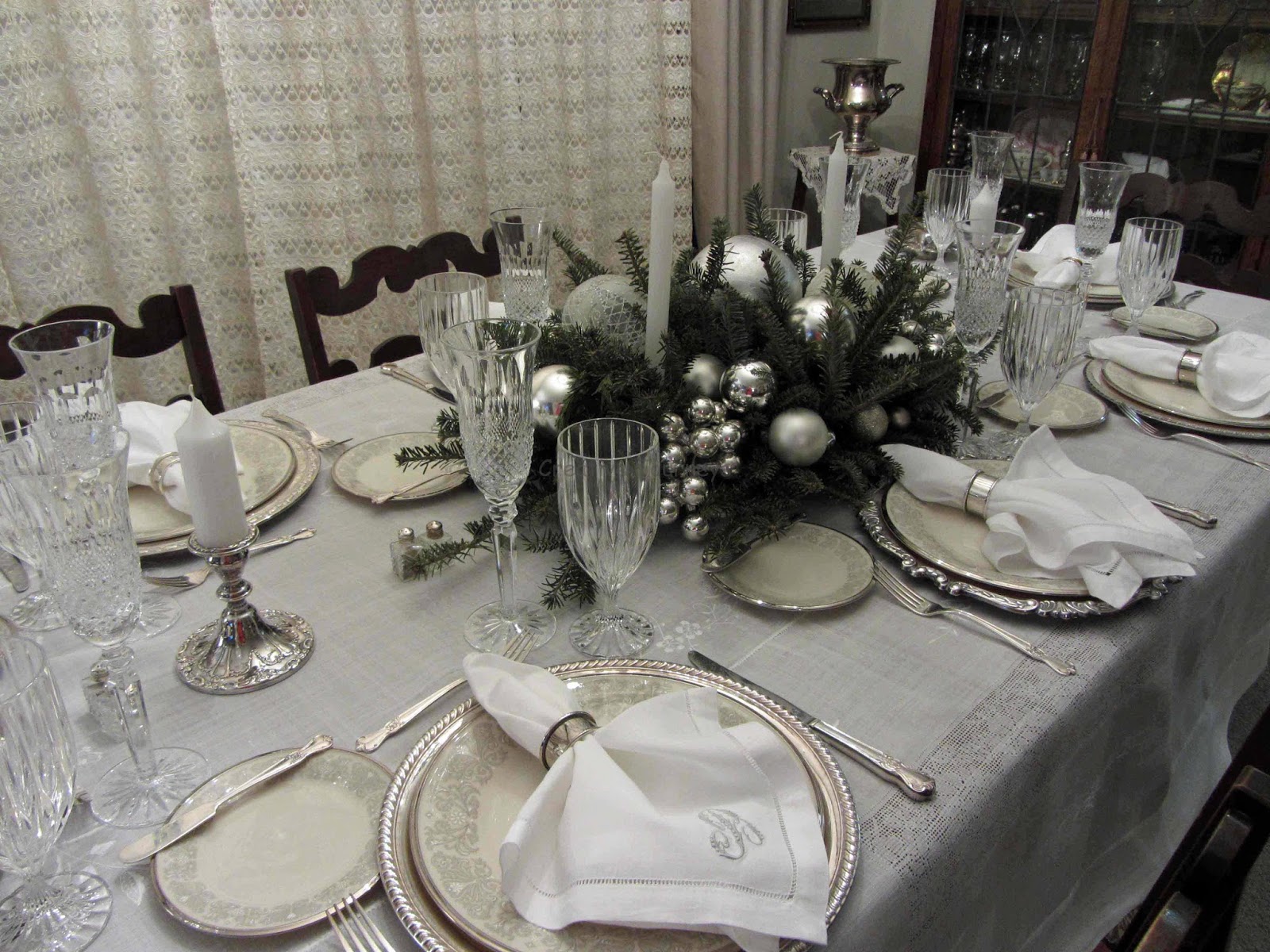 After all the color of the Christmas season, it's refreshing to see a cleaner, more simplified palette. 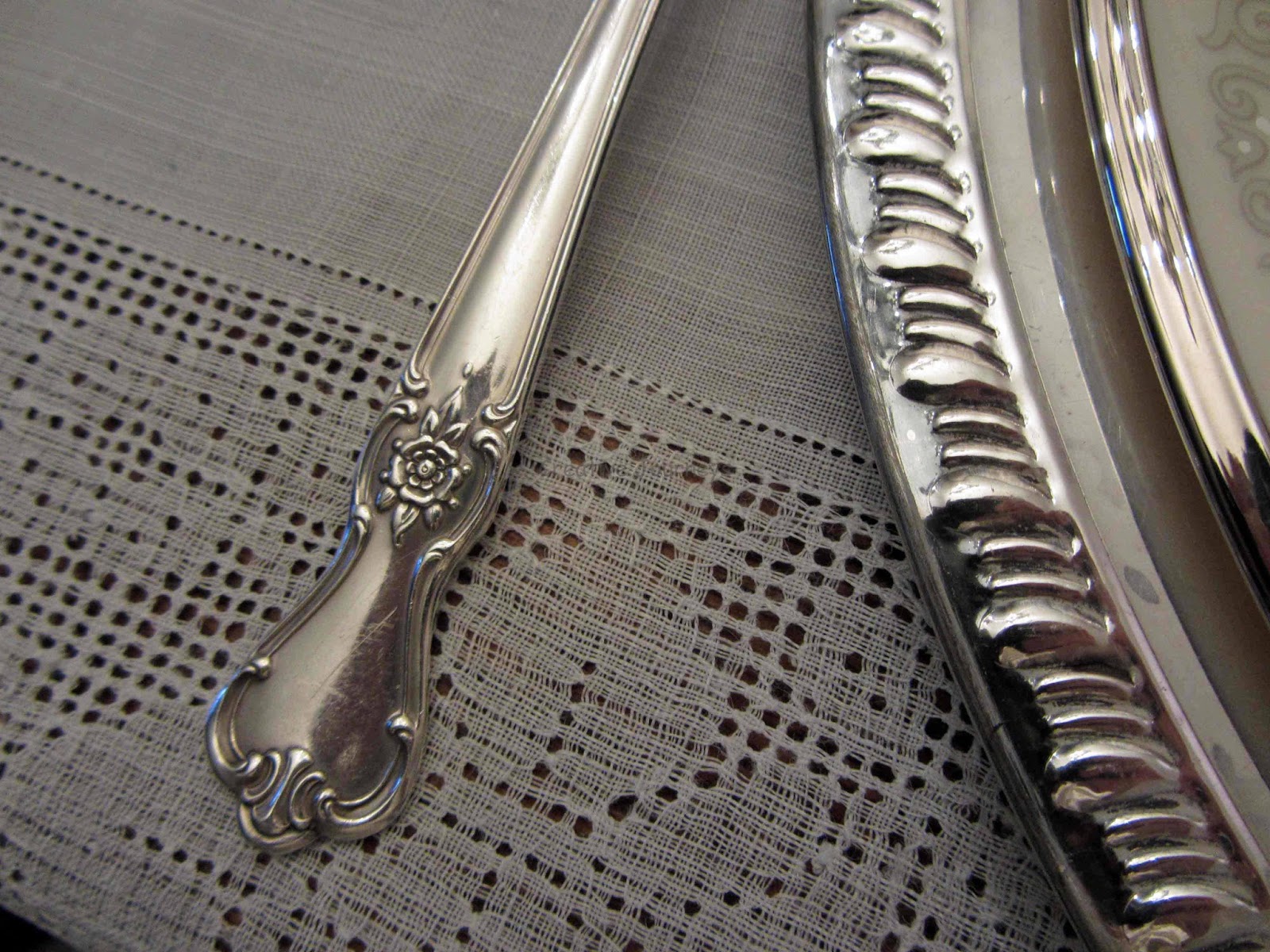 The handkerchief linen tablecloth is very fine and light. With the openings, I chose not to use a table pad. 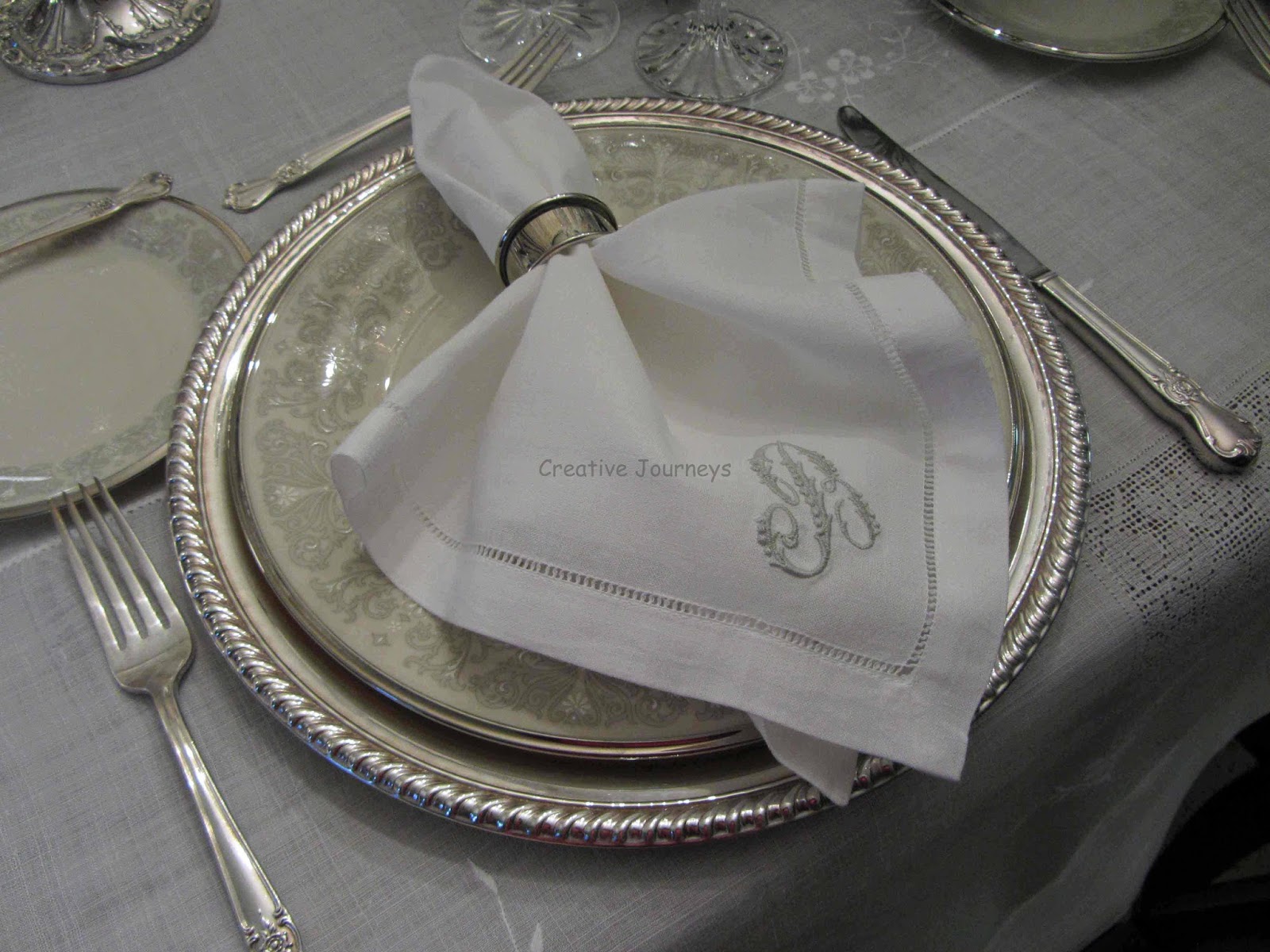 I do love our New Year's dinner! The menu has remained consistent from my husband's grandmother, to my sweet mother in law and now I carry on the tradition. I do really look forward to it. 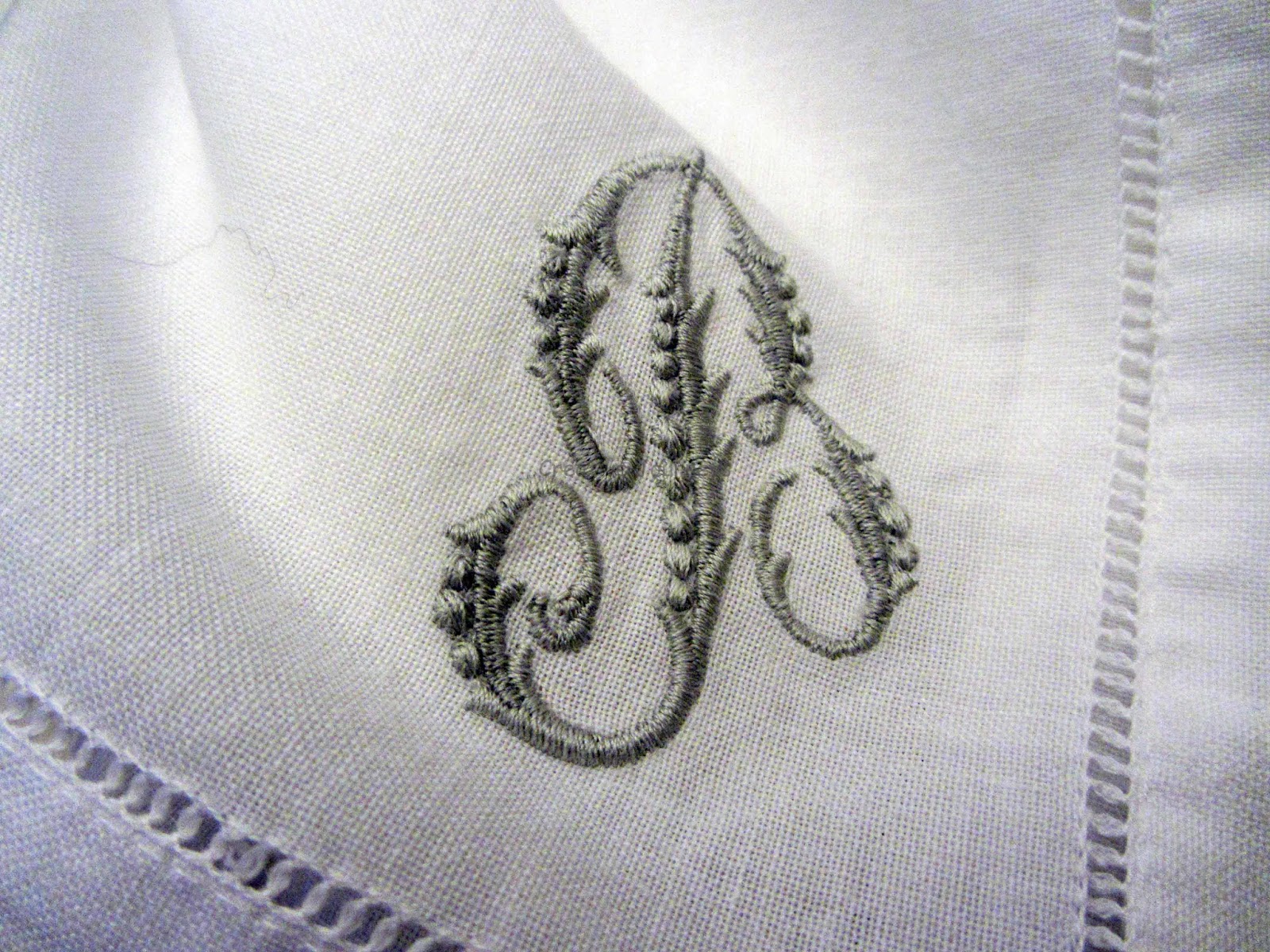 Thanks for coming by. Hope you enjoyed your visit.
I wish you joy and happiness in the year ahead.

I hope to be joining  Susan's Tablescape Thursday for her delightful and entertaining tablescaping party on  Thursday. See you there!

Easy Embroidery - How to Embroider Napkins 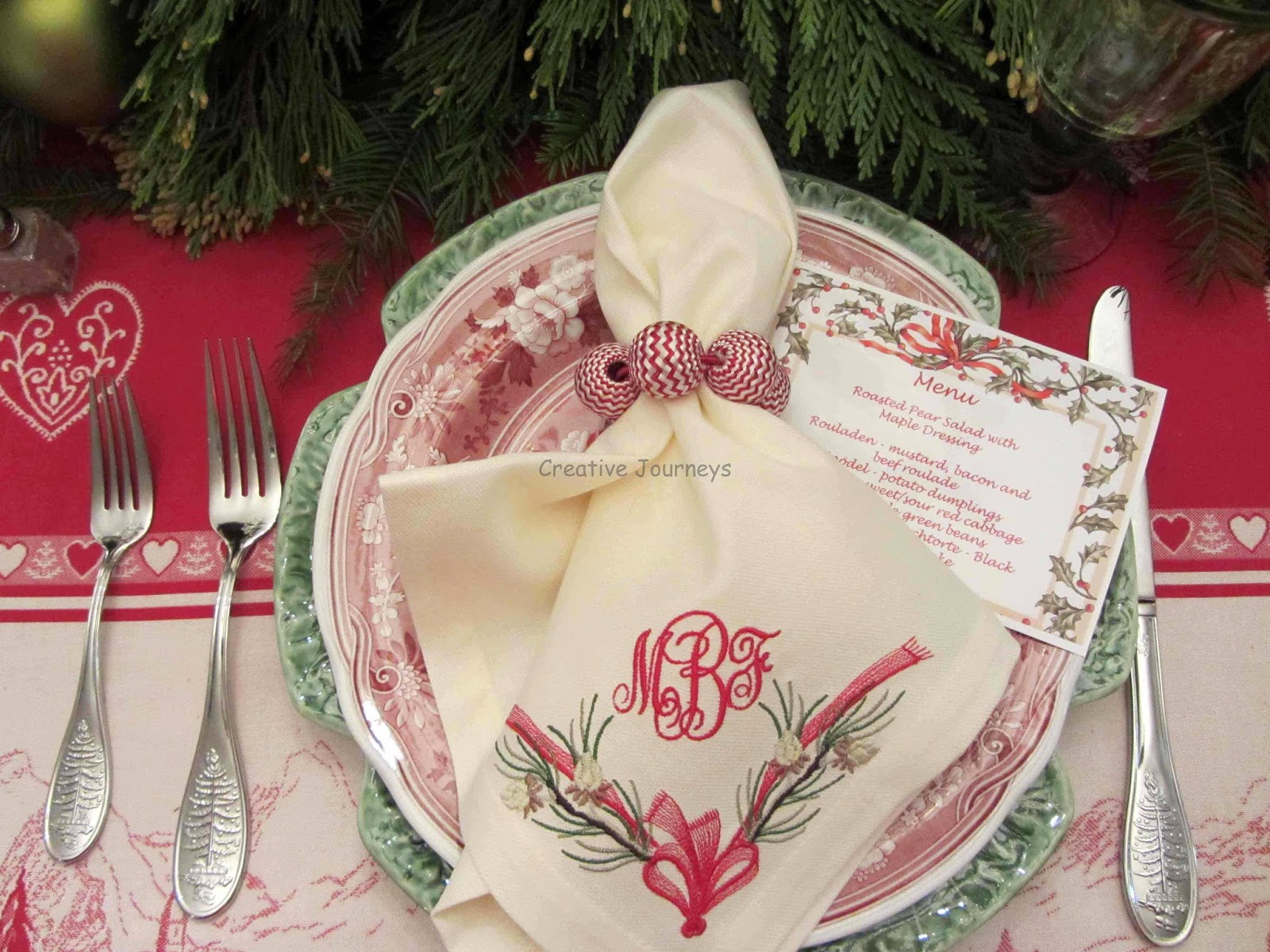 I want to share with you a quick and easy way to embroider napkins.

Let me preface by saying that I've had 20 or so years of embroidery experience. Wow, it's really been that long! I've learned the "correct" way to embroider, which stabilizer to use, which needles, which threads, for so many instances. Over the years, I've also learned which shortcuts I can take.

This is the way I embroider napkins, and many will say it's totally wrong, but it works for me, so give it a try, you might you like it, too. You'll notice I don't "hoop" the napkin. For me, I can get as good a result using this technique and I find it much easier than hooping the napkin, especially when some of the napkin won't be in the hoop anyway or even reach the hoop in others. Practice with this technique and you might just see that it will work for you! ;-) 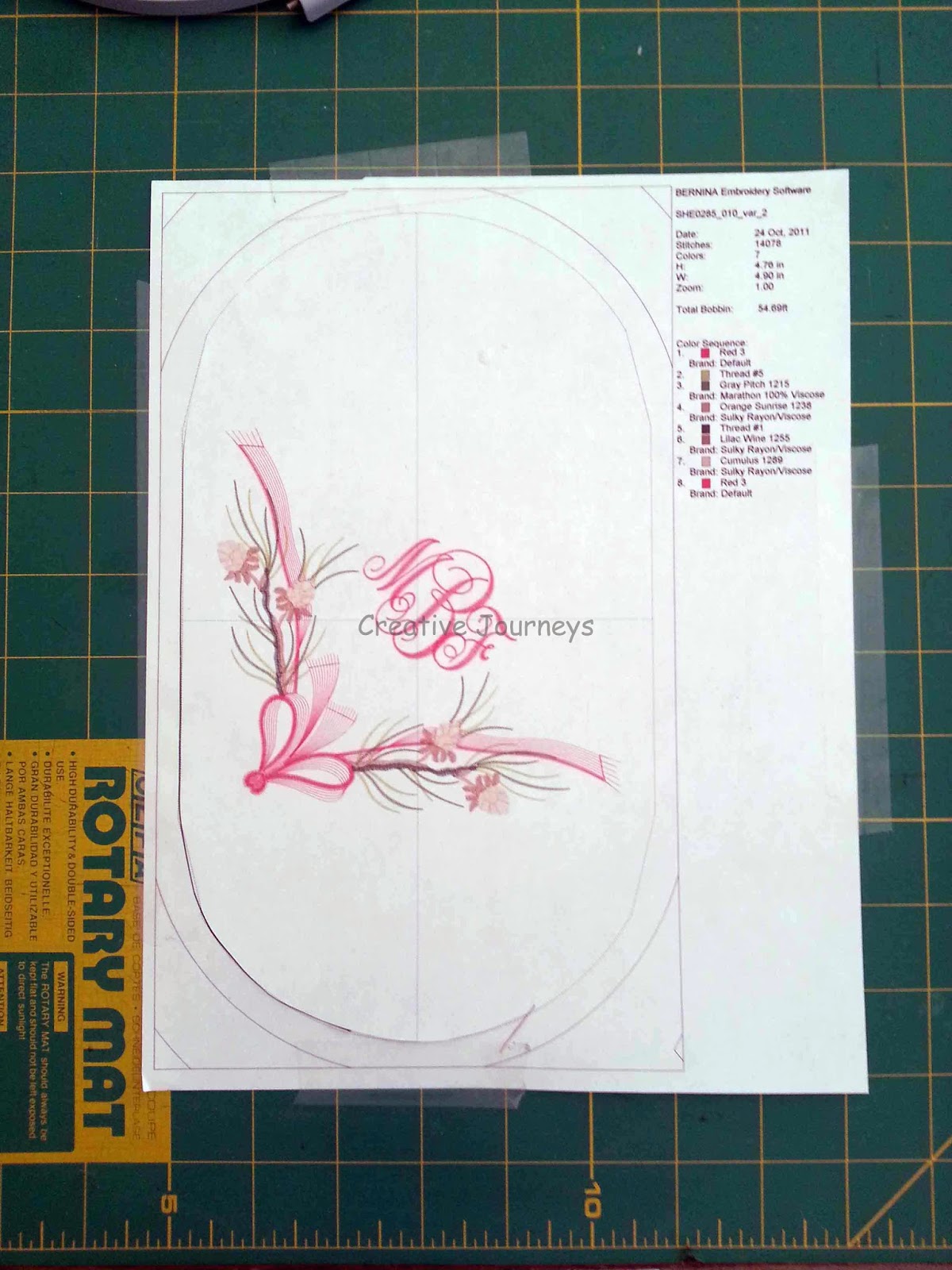 Tip: I like to tape the design to a cutting mat so that I can align the design (and later hoop with the grid lines) 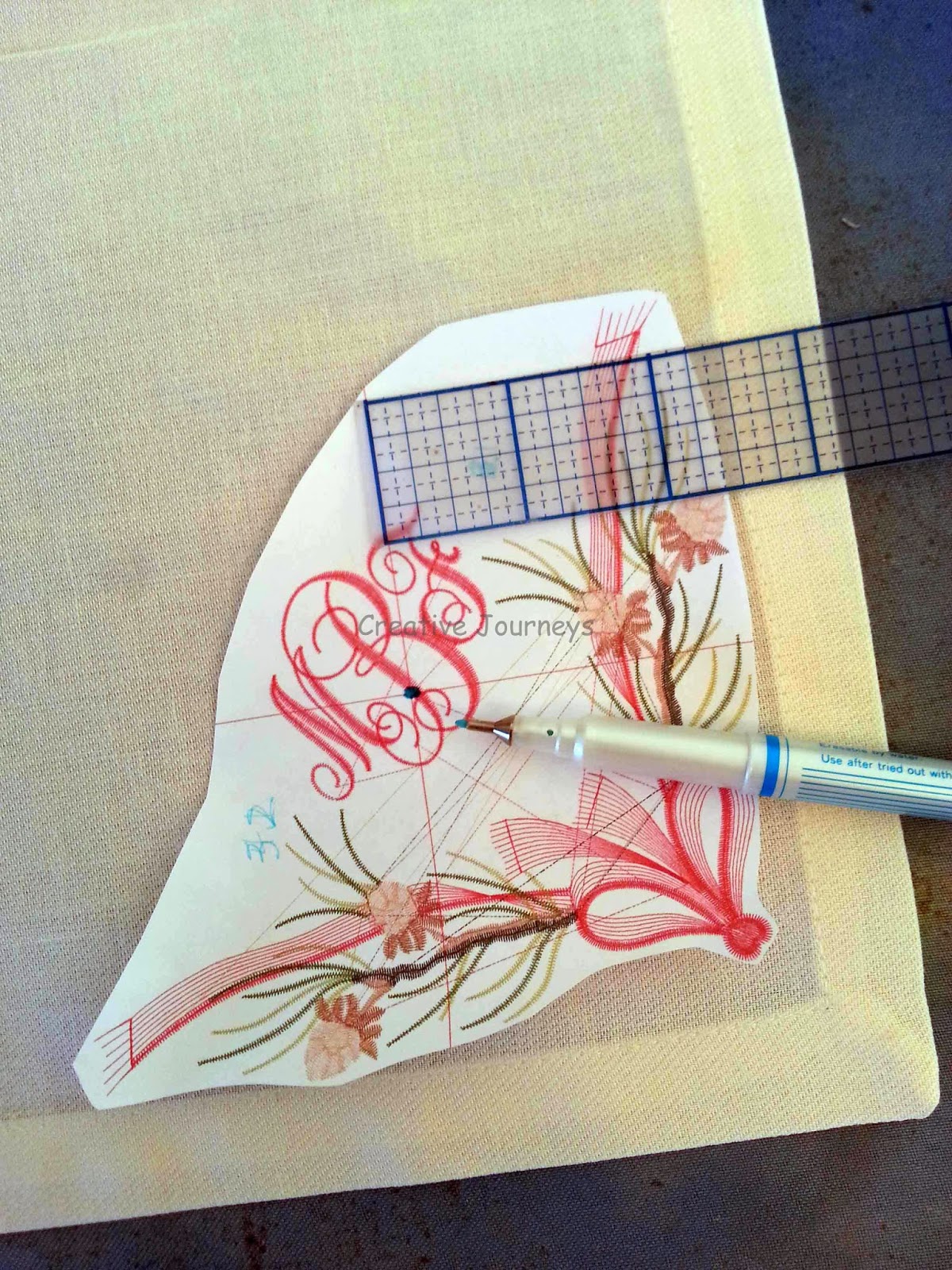 Tip: I never, ever use a purple air soluble marker. I have had the spot remain on colored linen. I prefer to use the blue water-soluble marker, always. 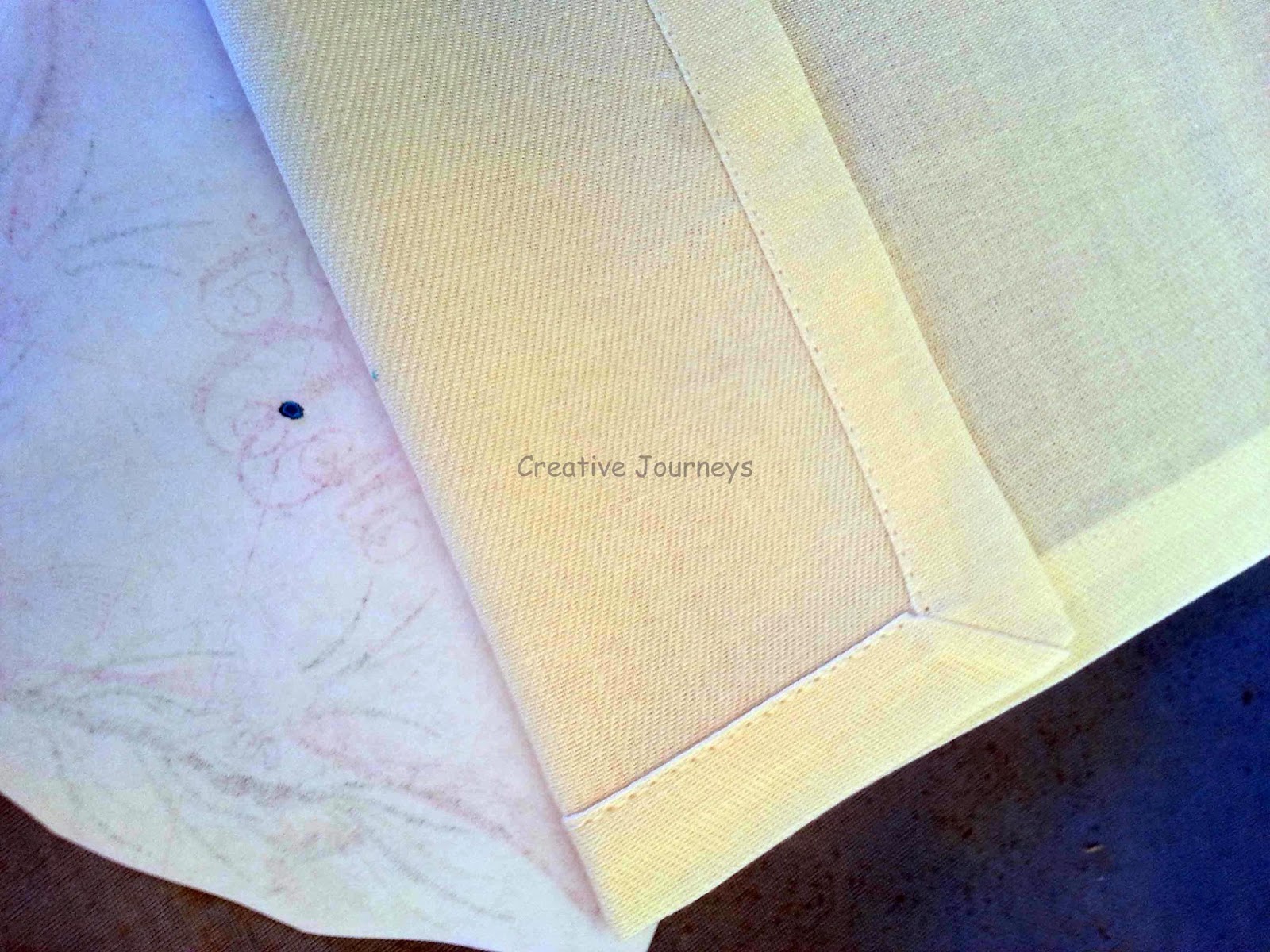 Fold the napkin back with the center mark as a guide, as to how much and keep the finished edges aligned, seen bottom right of the above image. 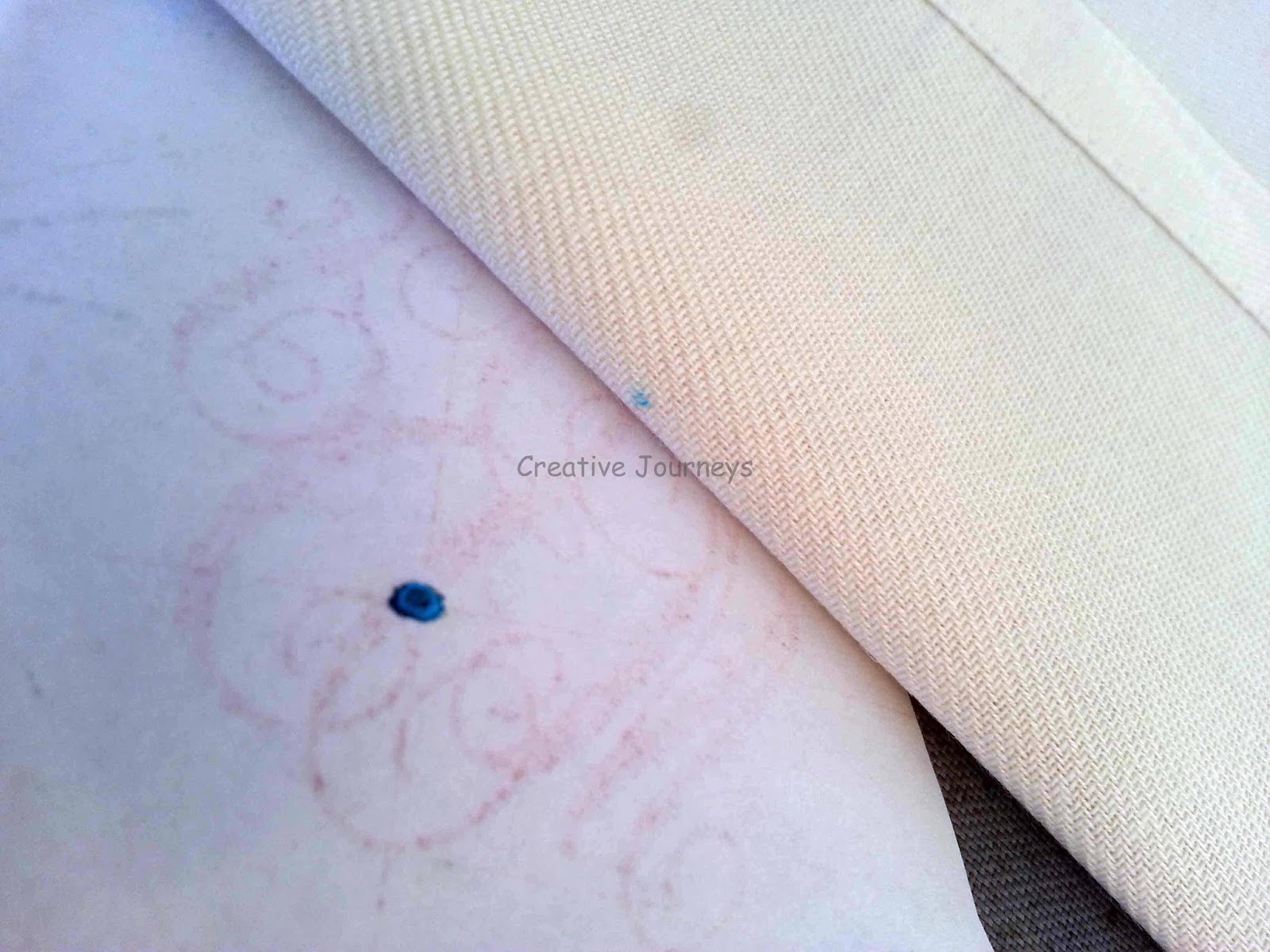 Note how the fold is through the blue water soluble mark. 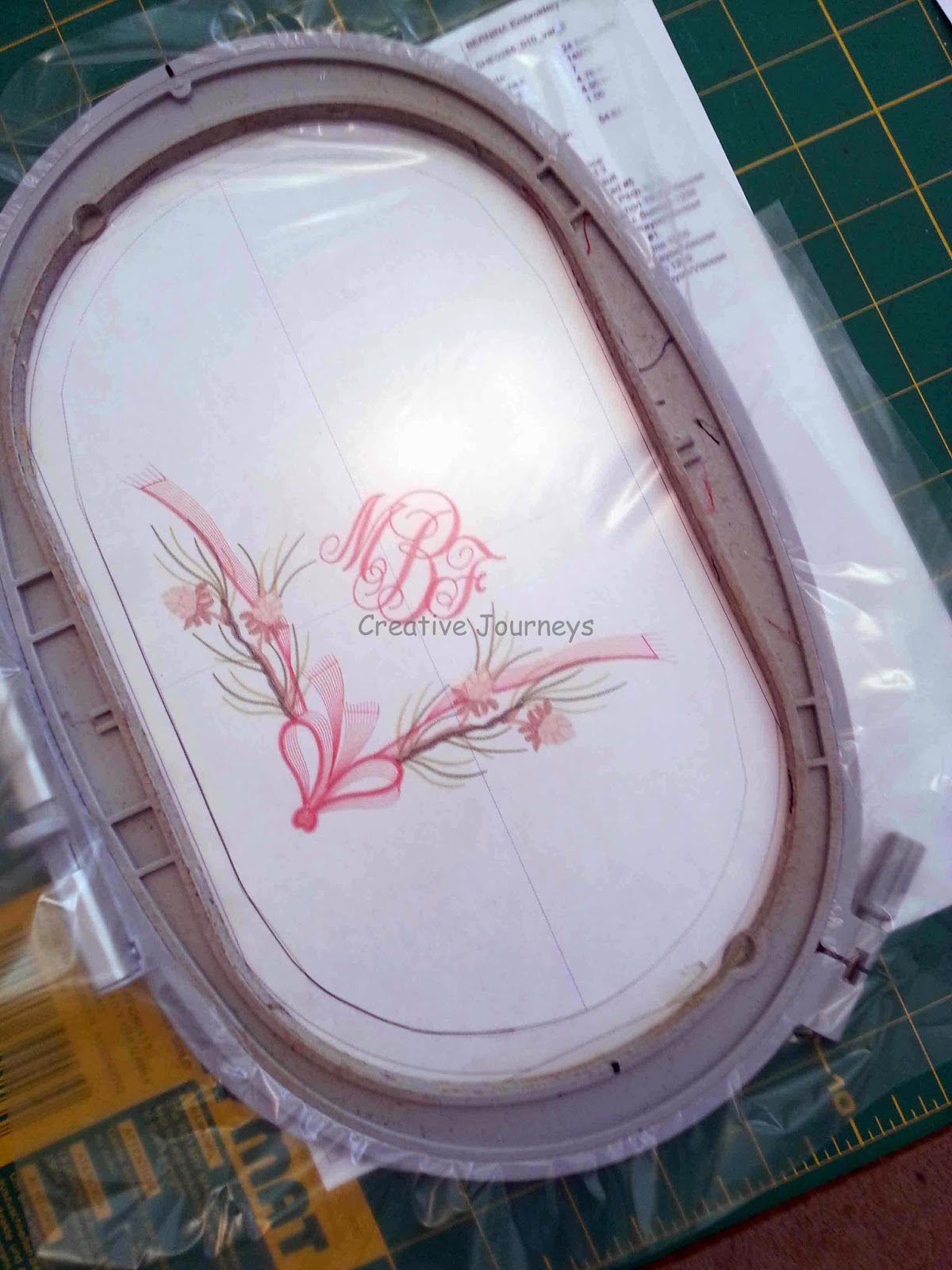 For this technique, I use a Heat Away Clear Film stabilizer. It literally melts at the touch of an iron. This way there is no remaining stabilizer on the back side of your napkin. Another option is to use a water soluble Mesh Rinse Away. If using the Mesh stabilizer, then darken the cross hairs of your printed design.


Tip: If you are embroidering satin letters that have a wide satin stitch, Heat Away Clear Film might not be the best stabilizer for that type of embroidery. Always, always do a test stitch out first. 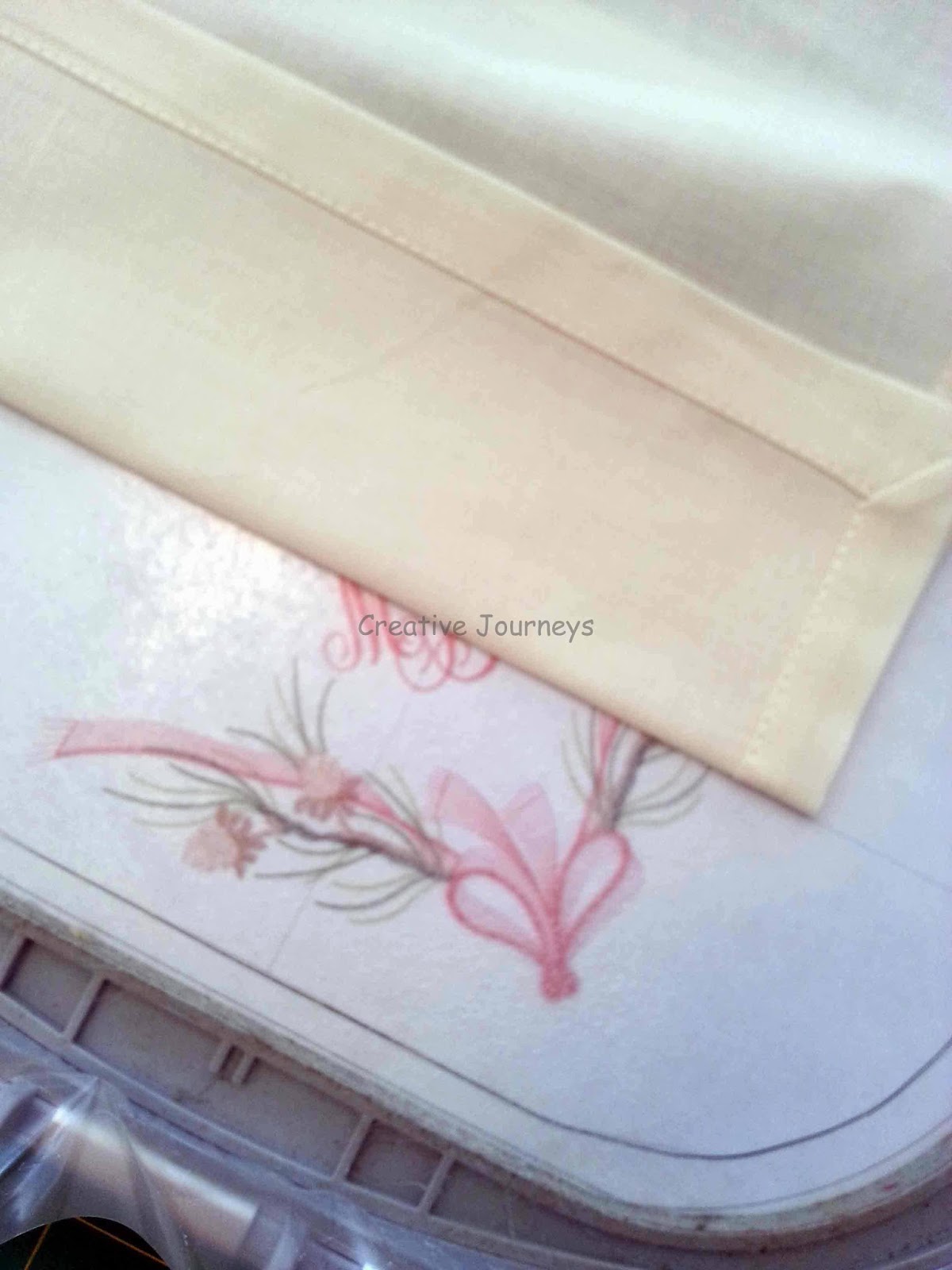 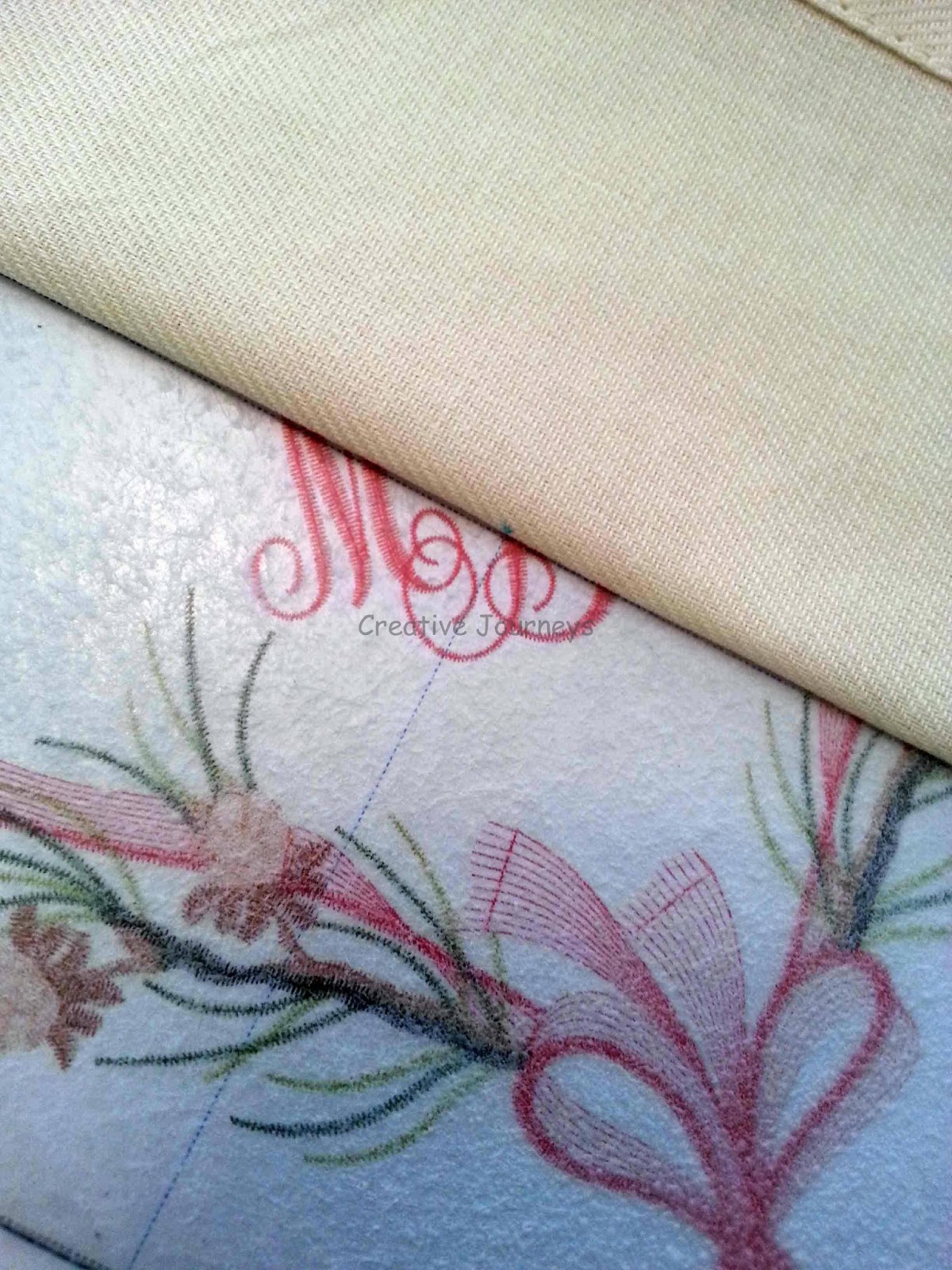 Tip: You may need to practice this a few times to feel comfortable with this method. If you lift up the napkin and need to reposition it, then check hoop alignment with the printed template again and also see if there is still enough adhesive to hold the napkin securely and if not, then respray the adhesive. 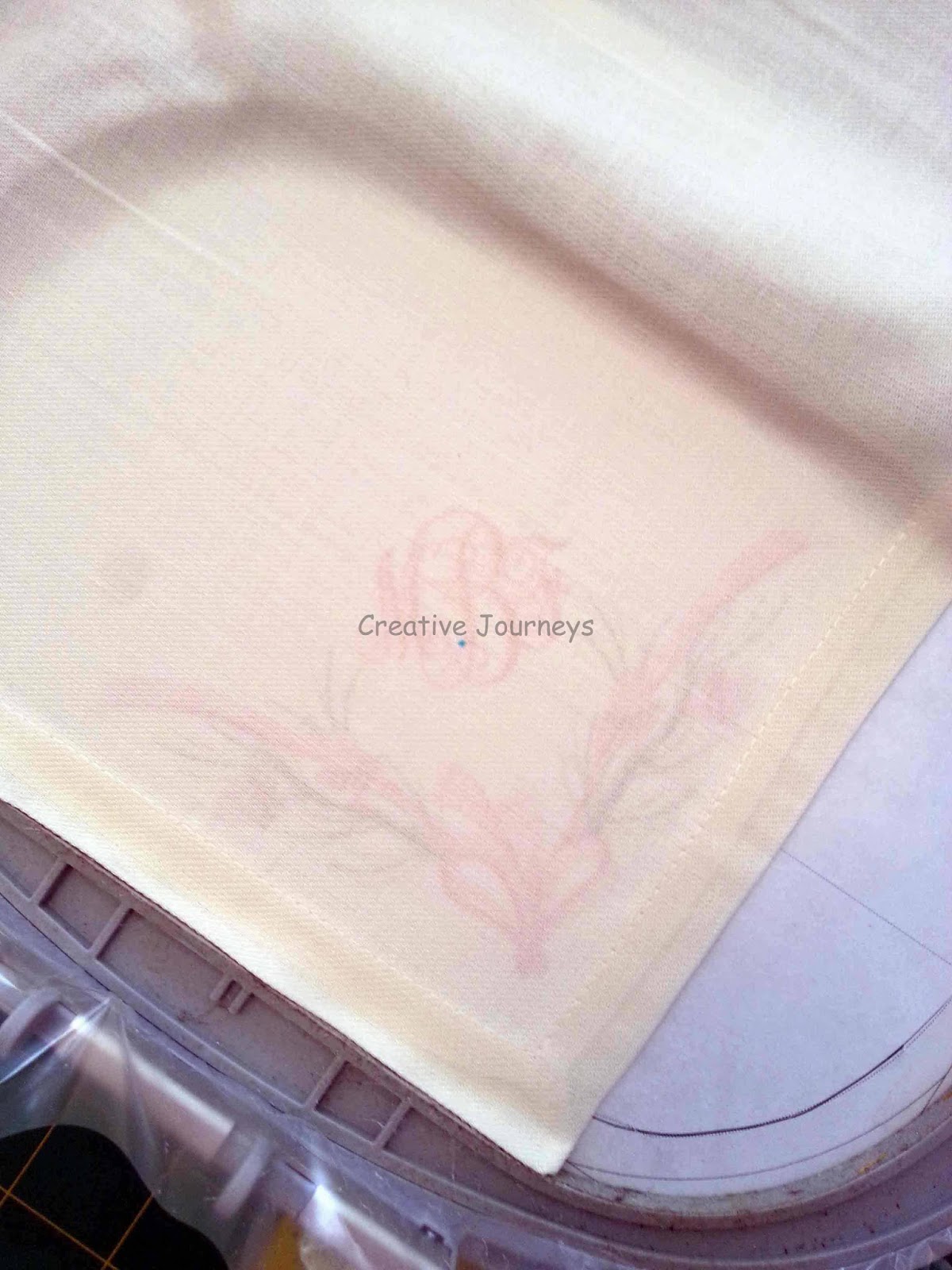 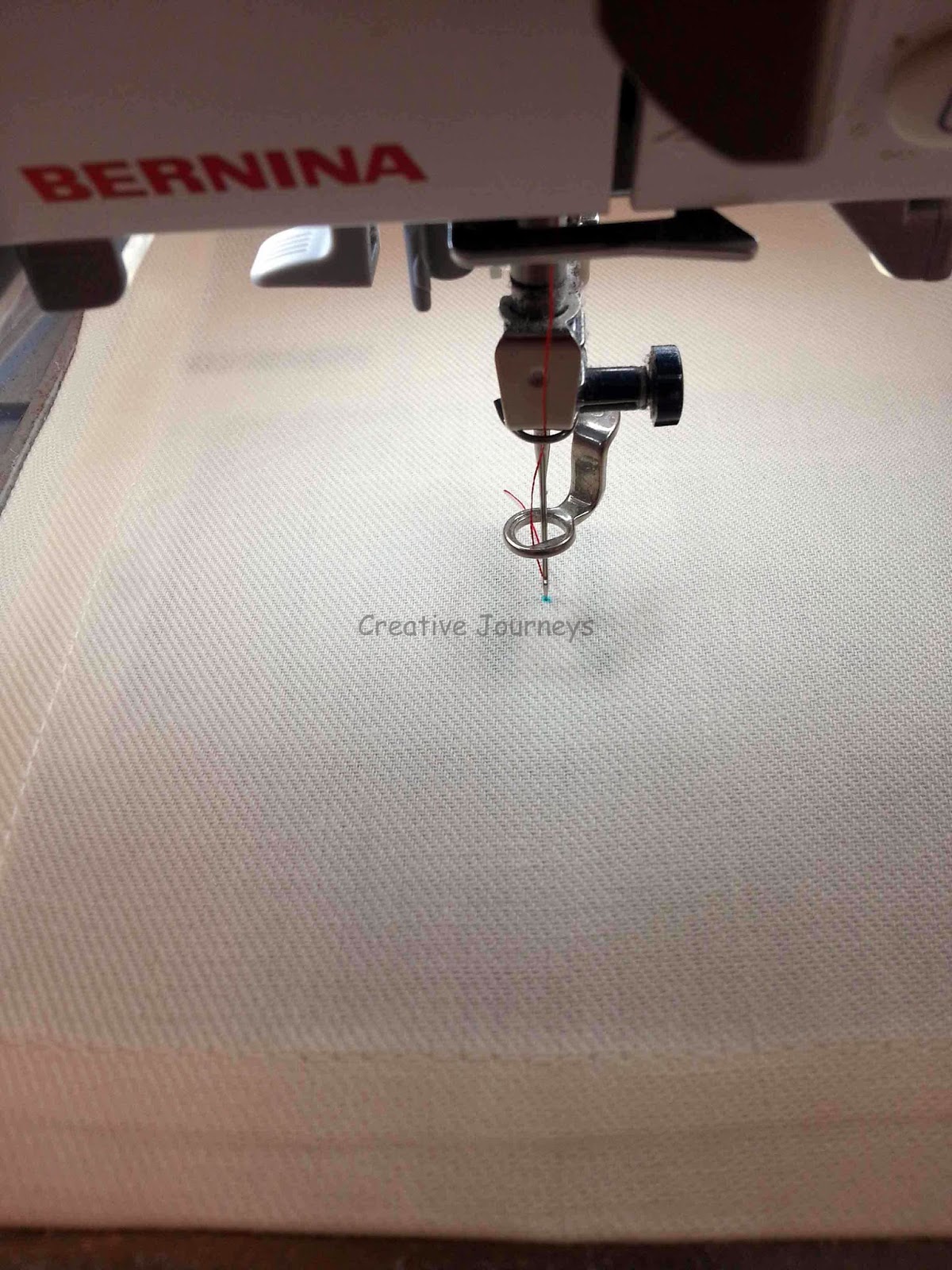 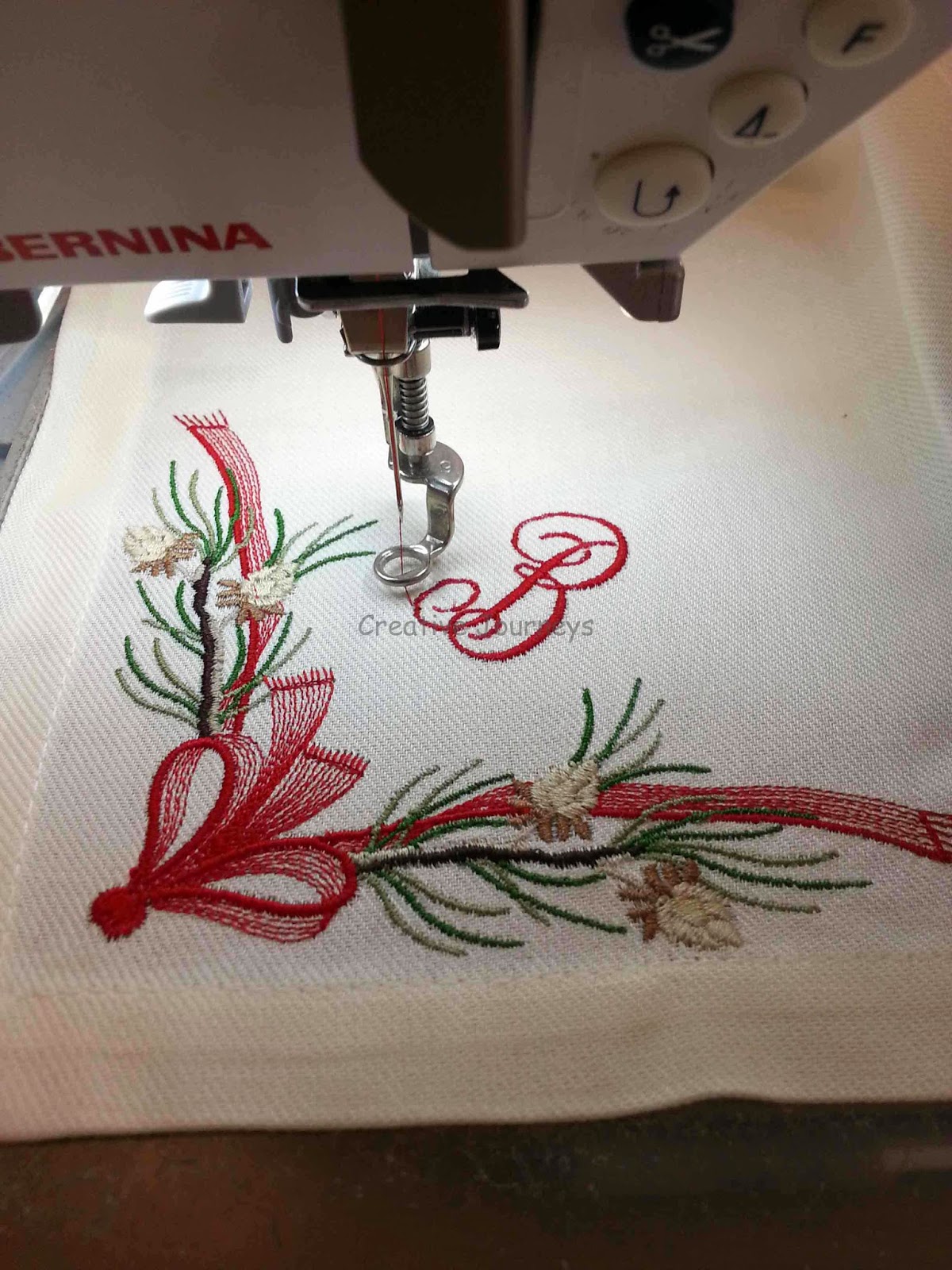 Tip: along with testing the stabilizer, I usually stitch out a test to see how the colors I have chosen work on the design. Your machine is really color blind and you can substitute any color you want for those designated in the design instructions. :-) 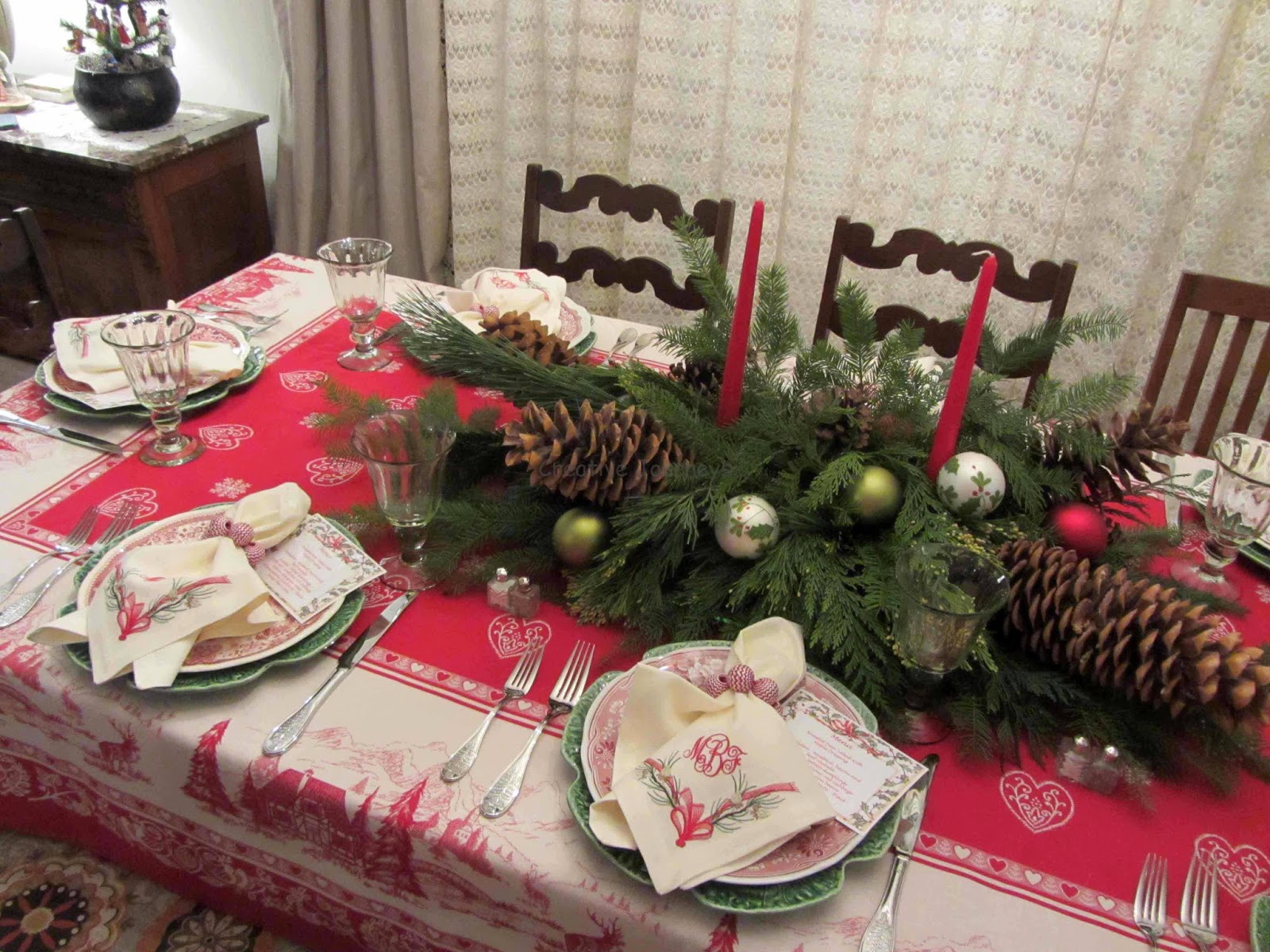 How pretty your table will be with your special napkins! They don't really need any special care. 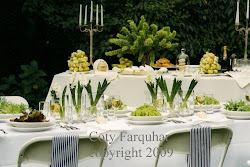